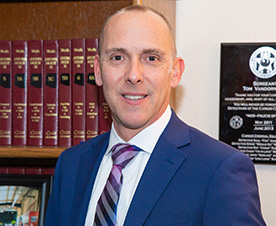 First responders are among the first to arrive and aid victims at accidents and crime scenes – and sometimes these same first responders are themselves the victims. These trusted authorities who regularly experience extreme conditions to protect the community and its citizens unfortunately often find themselves as victims of assault, gun-related crimes, vehicle accidents, robberies and more. These brave and heroic first responders often require services like crisis intervention, counseling and community referrals and like other victims of crime need help navigating the criminal justice process.

Tom Van Dorn served with the Phoenix Police Department just shy of 25 years before retiring to join MCAO. His final post was Commander for the Black Mountain Precinct which serves approximately 225,000 residents, 182 square miles and is staffed with 200 first responder officers. Tom joined the Police Department in 1995 and knew he wanted to be a law enforcement officer and an attorney at a young age. He started as an officer on the streets of South Phoenix and soon transitioned to a Legal Support Officer position while he continued in pursuit of his college degree. In 2001, he applied to and began law school at ASU. For two of those years he maintained a tough schedule of working full-time at the police department and attending law school as a full-time student.

With his law degree in hand, Tom became a permanent Legal Advisor with the Phoenix Police Department and was later promoted to Detective and then Sergeant. As a Field Training Sergeant with the police department, he combined his law enforcement experience and his legal knowledge to train new Academy graduates as well as oversee undercover officers who were investigating things like outlaw motorcycle gangs, murder-for-hire investigations schemes and traditional street gangs. Tom reports that those were some of the most rewarding years of his career. Later as a Precinct Commander, he thoroughly enjoyed engaging and interacting with the community through activities that included working with business and church leaders, citizens and community groups.

Tom’s unique experience and background as both a first responder and an attorney make him the perfect leader to assist our County Attorney in forming the new MCAO First Responder Bureau. Tom and the County Attorney have been analyzing the issues that first responders face and they agree that MCAO should be a collaborative partner with first responder agencies in Maricopa County. “Public safety is more than just law enforcement officers,” said Tom. “We want to encompass the broader first responder community and include not only police, but firefighters, EMT, paramedics, detention officers and others.”

The First Responder Bureau will be staffed with prosecutors, specialized paralegals, administrative staff and victims advocates and the Bureau will be located within the Criminal Group. These specially trained team members will work primarily on assaults and other offenses against our County’s first responders.

Tom feels blessed to have had the opportunity to participate in many leadership courses over the years and through these he has refined his current leadership style. He personally believes that leaders exist at every level in an organization regardless of one’s title. There is something for everyone to learn on a daily basis and when we think we have all the answers is the day we have fooled ourselves. Under Tom’s leadership, the MCAO first responder team will be character driven and servant-based, assisting the needs of others; it will be consensus-based so he can solicit solutions to challenges from the team before making decisions and it will be enlightenment-based which will empower the team to make decisions and utilize their discretion. As Tom sums it up, “I try my best to listen to understand and not always listen to reply and I look forward to meeting and working with the entire team here at MCAO.”