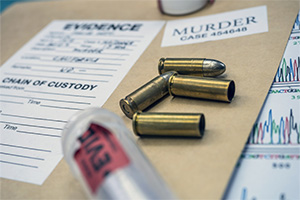 Firearms are increasingly being used in the commission of violent crimes against innocent victims in Maricopa County. Shooter Dwight Jones went on a four-day killing streak in Phoenix, Scottsdale and Fountain Hills in 2018, killing six people all of whom he believed were responsible for different parts of his bitter divorce and child custody battle. Jones ultimately took his own life as law enforcement closed in on him in a motel room. Cleophus Cooksey was arrested for nine different murders over a three-week period in Phoenix in 2017 and is set for trial in Maricopa County early next year. These kinds of multi-defendant, multi-incident, multi-law enforcement cases are increasing and these complex cases require specialized support and investigation.

In 2018, the City of Phoenix partnered with the Bureau of Alcohol, Tobacco, Firearms and Explosives (ATF) and was awarded a grant to help combat the increase of violent crimes by linking the shell casings in the National Integrated Ballistics Information Network (NIBIN), so when one gun is used for multiple crimes—in different cities or even states, and over different dates—investigators and prosecutors are able to put the puzzle together faster and easier than ever before. NIBIN not only assists with arrests and cases but also with leads that often result in arrests and solved cases.

The grant awarded to the City of Phoenix helped them implement a standard process of automated ballistics evaluations which prior to this was done manually on a case by case basis. High definition pictures of the expended shell cartridge casings can be entered into the Integrated Ballistics Identification System (IBIS) and the images and information can be compared and analyzed against other evidence not only from their jurisdiction, but from jurisdictions across the country. The high definition pictures capture the tool marks on the expended shell cartridge casings which are unique to each gun. A match indicates the casings were fired from the same weapon.

The Phoenix Crime Gun Intelligence Center (CGIC) was so successful with this project that the MCAO created a CGIC prosecution team consisting of 17 prosecutors and one criminal intelligence analyst. The MCAO team was also recently awarded a grant worth nearly $300,000.

Addison Owen was the first MCAO CGIC prosecutor for the 2018 grant and her enthusiasm and expertise with these kinds of cases has helped establish a collaborative group of law enforcement agencies to encourage more participation in NIBIN, and to identify issues that are impeding investigations and prosecutions of gun crimes in Arizona. “This is a collaborative approach to using the NIBIN technology combined with sharing information and resources to identify and, in many instances, apprehend and prosecute these dangerous offenders,” said Addison.

The MCAO CGIC team is working to create a training plan for all attorneys who participate in the program and with the recent grant award they are looking to add a permanent analyst and paralegal to support the program. In addition, the ASU Center for Violence Prevention and Community Safety recently committed to becoming the research partner for the Phoenix Police Department’s CGIC grant project.

“Having access to this database as well as a large group of trained prosecutors and investigators helps us solve cases that may have never been solved,” said Addison. “Some of these crimes involve truly innocent bystanders and victims and identifying these offenders was a difficult task. Participating in CGIC is a win-win.” CGIC’s state-of-the-art investigative technology and data systems coupled with some old-fashioned detective work help prosecutors, like Addison, analyze ballistic evidence, establish connections among seemingly unrelated crimes and build successful criminal cases targeting dangerous criminals using guns.