This article originally appeared in the Scottsdale Independent, Friday, October 4, 2019 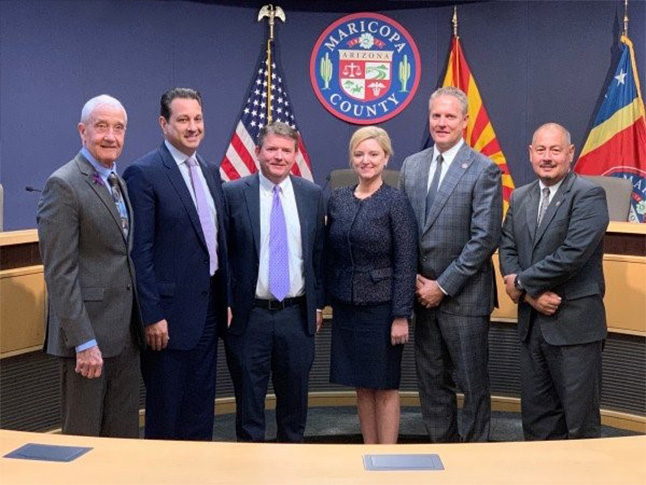 Allister Adel (center right) was sworn into office Thursday, Oct. 3 after a unanimous vote of the Maricopa County Board of Supervisors, appointing her as Maricopa County Attorney.

For the first time in Maricopa County history, a woman will serve as the county’s chief prosecutor.

Allister Adel was sworn into office Thursday, Oct. 3 after a unanimous vote of the Maricopa County Board of Supervisors, appointing her as Maricopa County Attorney, according to a press release.

“I am excited that the Board has selected Allister Adel as the next Maricopa County Attorney,” Board of Supervisors Chairman Bill Gates, District 3, said in a prepared statement.

“She is an excellent attorney and community leader, as well as an experienced administrator. I am confident in her ability to lead the office and I’m proud we appointed the first-ever female Maricopa County Attorney.”

In public comments after her swearing in, Ms. Adel spoke of representing diverse interests in the criminal justice system.

“To our victims, we are here to protect your rights. We are here to do justice and do what is fair,” Ms. Adel said in a prepared statement.

“To our community leaders and community groups, we hear your strong voice and I am here to listen. To our law enforcement officers, you are not walking alone. We stand beside you.”

Ms. Adel is no stranger to the Maricopa County Attorney’s Office, having served as deputy county attorney from 2004-11.

“Allister will be a great advocate for the people of Maricopa County and for justice,” Vice Chairman Clint Hickman, District 4, said in a prepared statement.

“While I want to thank all the applicants for their commitment to our community, I believe Allister is the best person to carry on the fantastic work being done by the Maricopa County Attorney’s Office.”

District 1 Supervisor Jack Sellers said the board had eight “strong candidates,” making for a difficult decision.

“I’m grateful to the Citizen Advisory Committee for their recommendations and insight,” he said. “I believe Allister Adel will represent our constituents well.”

Ms. Adel replaces Bill Montgomery, who was appointed to the Arizona Supreme Court in late summer.

“This is the most important appointment we have made as a Board, and I’m particularly proud of our process,” Supervisor Steve Chucri, District 2, said in a prepared statement.

“We appointed a diverse citizen committee, reflective of our community, and we were open to their ideas and each other’s perspectives. The result was a historic pick with the right experience and temperament for the job.”

The Board of Supervisors officially accepted Mr. Montgomery’s resignation on Sept. 9. That same day, board members outlined a process for filling the vacancy and began accepting applications, a release states.

On Sept. 18, the application window closed and a seven-member Citizen Advisory Committee was convened to screen and interview the eight candidates who applied.

On Tuesday, they recommended five of the candidates to the Board, one of which was Ms. Adel. At each step in the process, the public was invited to comment, either in person or online.

“Ms. Adel has an impressive resume and I look forward to working with her on criminal justice reform efforts,” Supervisor Steve Gallardo, District 5, said in a prepared statement.

“The justice system impacts our communities of color in different ways and I am hopeful she will listen to and represent people who feel marginalized.”

The Maricopa County Attorney’s Office is the third largest public prosecutorial agency in the country, comprised of more than 900 full-time employees including attorneys, investigators, paralegals, victim advocates, and support staff.

The County Attorney’s Office is responsible for prosecuting all felonies that occur in Maricopa County and all misdemeanors that occur in unincorporated areas.

In addition, the county attorney serves as legal counsel for the Maricopa County Board of Supervisors and all county departments.

Ms. Adel will serve out the remainder of Mr. Montgomery’s term which ends in January 2021. To continue serving in this position Adel would need to run for the office in the 2020 primary and general elections.

“I promised in my interview process I would serve with integrity and honor,” Ms. Adel said.

“I make this commitment to you and every member of Maricopa County that we are going to work together to move forward the mission and the values of the fourth largest county in the United States.”